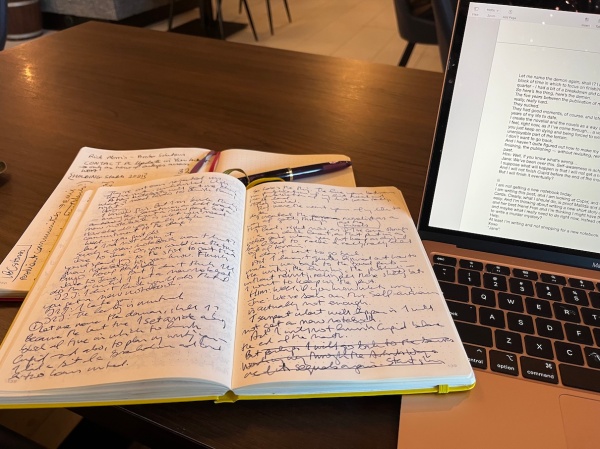 I’m on page 136 of 250 in a bright yellow Leuchtturm 1917 hardcover notebook — my favourite notebook type and brand, yes, I’ve just inserted an unpaid product placement in this post, sorry. Each notebook lasts me two to three months. It’s where the Morning Pages and first drafts of posts, skeleton sketches of ideas and occasional texts live. (Yes, I sometimes draft texts longhand, don’t you? Perhaps you should. Halfway through the drafting, 90% of the time, I decide to make a phone call instead… or NOT send the text, let the argument go. And if I do decide to send that text? It’s PERFECTLY crafted. #highlyrecommendedcommunicationpractice — no, I don’t think that hashtag will catch on but how about #hrcp? ok I’m lost in a digression, let’s move on…)

Shopping lists also live in the notebooks, ditto bad poems (first and final drafts of). And, when I’m writing the way I want to be writing, the notebook is my process journal, the place in which I ponder how and when to kill grandma and where did I go wrong with the hero’s character development, because he is such a soppy milquetoast (it’s a GREAT word, look it up), I don’t ever want to be trapped in a conversation with him, so why should Amelia be remotely attracted to him when he trips over her umbrella and falls down at her feet?

Don’t get me wrong: if you ask me, ever, “Jane, look at this cute notebook, should I get it?” the answer is always, Yes.” If you’re a working writer and you enjoy working longhand, there is no such thing as too many notebooks. You’ll get to it eventually.

(But if you’re looking for a gift for me, please don’t get me a notebook. I’m particular: it needs to be hardcover, the lines need to be a certain size — too narrow or too wide and my experience is 100 per cent affected, the paper has to take fountain pen ink well, the size of the page needs to be just right and, god, it’d better lie flat when opened, how do they even get away with making notebooks that don’t do that? Dammit, I’m digressing again, it’s because I’m afraid to write about the thing I actually need to write about…)

The reason I want to get a new notebook now is because I want to abandon the current one. I want a hard break between today’s writing and tomorrow’s first line and I want it because I hope that new notebook will galvanize me into doing that thing I need to do right now — take one of my six unfinished manuscripts and take it across the finish line.

Yes. I currently basically have almost as many unfinished manuscripts than I have published novels – more if you count the 2020 trilogy as one mega novel rather than three novellas.

This is not ok.

They’re not even rejected manuscripts. They’re just… unfinished. So close to finished — Matilda a final proof away from being ready for an agent’s and publisher’s eyes.

A new notebook will get me doing what I need to do do finish them, right?

You don’t have to answer.

I know the answer is, “Wrong.”

I know this. But I’m kinda thinking… maybe? Sometimes, a hard break, not just a new page but a new notebook is what you need to mark the end of one thing (procrastination, paralysis?) and the beginning of another (execution!). How else do you really make a commitment to the change you’re promising yourself?

Well… you just do it.

But I’m not doing it.

Maybe a new notebook… and if doesn’t help, surely, at least it won’t hurt?

Jane to Jane: Or, you could use the time you’d spend going to the store to get that new notebook to, you know. Write those final chapters of Bingo. Proof Matilda.

Jane to Jane: But I just don’t think I’ll do that until I get that new notebook.

Jane to Jane: I don’t think you’ll do that if you get a new notebook.

Jane to Jane: I hate you.

Jane to Jane: The feeling is mutual.

Let me name the demon again, shall I? I know it intimately. The last time I set aside a generous block of time in which to focus on finishing Bingo – and also, to plan my writing year and quarter – I had a bit of a breakdown and cried for two hours instead.

They had good moments, of course, and lots of photogenic highlights, but they were the worst years of my life to date.

I create the novelist and the novels as a way of getting through them.

I feel, right now, as if I’ve come through… a very dark forest, or that part in a video game where you just keep on dying and being forced to relive, over and over again, a really awful, unenjoyable part of the terrain.

I don’t want to go back.

And I haven’t quite figured out how to make my way back to the good parts — the writing, the finishing, the publishing — without revisiting, reliving all those shitty bits I want to keep in the past.

Him: Well, if you know what’s wrong…

Jane: We’ve been over this. Self-awareness is actually not enough.

I suppose what will happen is that I will not get a new notebook.

And I will not finish Bingo before the end of the month.

But I will finish it eventually?

I am not getting a new notebook today.

I am writing this post, and I am looking at Bingo, and what I need to do to it. Also, All in the Cards. Clearly, what I should do, is proof Matilda and send her out into the world, but that’s too easy. And I’m thinking about writing a new short story about a wanna be dominatrix called Tina and her best friend Fran and I’m thinking I might have them discover a body in the dungeon and maybe what I really need to do right now, instead of finishing one of those six romances, is to write a murder mystery?

At least I’m writing and not shopping for a new notebook. Right? 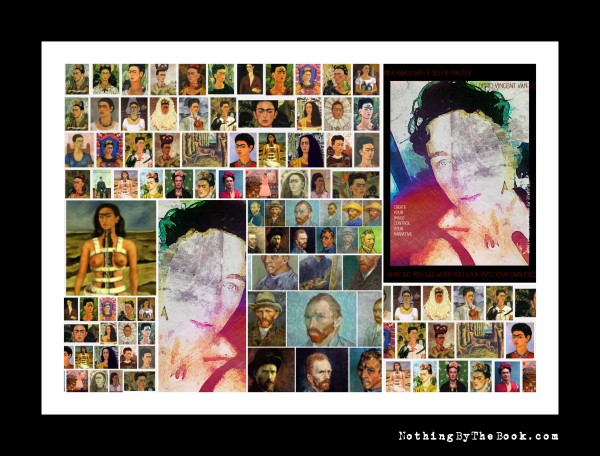 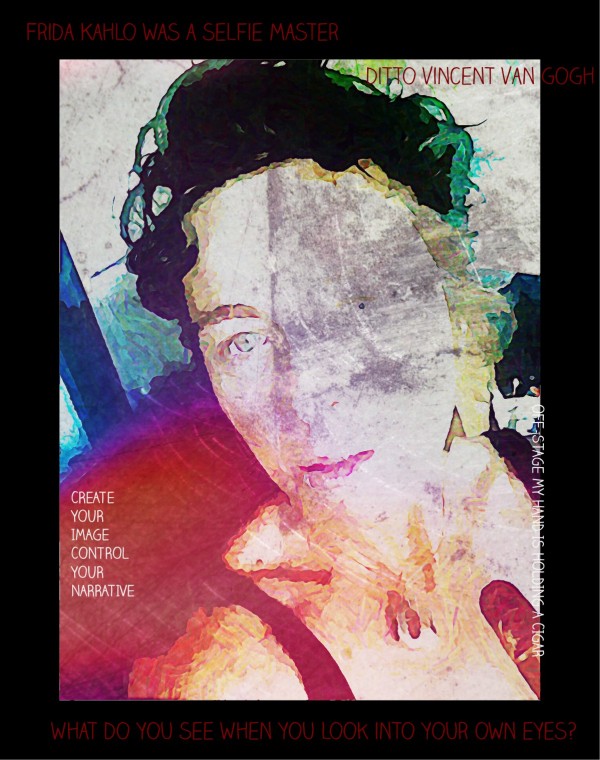 Cinder: You know, Mom, I don’t know if you’ve heard, but before there selfie, there was this thing called the someone-elsie, and it was this crazy thing–get this–someone else would take your photo. Bizarre, eh? It was invented in the Victorian times by…

PS. No homework this week. Please yourself.

PS3 What? I’m busy. And you’re on holiday. And I know you’re not doing the homework anyway.

PS4 Fine. Across the street (or hallway) from you lives a 72 year old woman who always wears a blue wig and carries her pet cat in a bird cage. This drives you crazy. And… go… 500 words minimum–the story ends with her dying and bequeathing you the cat and the wig.

PS6 What? I gave you the beginning and the ending. You just have to take care of the middle.

PS7 Fine. Just take a selfie, fiddle with it in Photoshop or something and call it art.

This is me, standing at the kitchen sink, thinking about doing my laundry:

— no, of course I’m not going to post a picture, if I had, the caption would have to be, “This is me, taking a picture of myself standing at the kitchen sink, thinking about doing my laundry,” and that would have been just too meta for what I want to do –

…and, this is still me, standing at the stove, watching water boil, thinking about doing my laundry, and also, that I have clothes for at least two more days, maybe four if I ration and don’t spill anything on myself at meal time (could happen), and

— I’m also not posting a picture because, when I say, “This is me, standing at the kitchen sink, thinking about doing my laundry,” can you not see me, anyway? I bet you can—tell me, am I wearing grubby clothes, am I wrapped in a dressing gown, or am I dressed to kill? –

and I’m about to stop thinking about it and actually walk down the stairs into the basement and start DOING it – cross my heart – when Ender walks into the kitchen, so instead, I text Sean:

“Your son will not stop eating!”

and I boil a giant pot of noodles—wait for it to come to a boil—set the timer for eight minutes—and during those eight minutes, think about doing my laundry, draft this post, drink four sips of coffee, and

Ender: “These are very boring noodles. Aren’t you going to put anything in them?”

I’m almost ready to go downstairs and sort the delicates from the “I don’t give a craps”—I rinse the pasta pot and the strainer, turn off the red hot element on the stove, remember my coffee, sit down, take a long luxurious sip, really, I could probably not do my laundry for five more days, and I’ll have gym stuff to wash on Thursday anyway, so is doing the laundry a necessity or a make-work project?

Ender: “I ate all my boring noodles. Is there more?”

Ender: “Can you make more?”

Jane: “Here. Please eat this raw steak, and if you’re still hungry, fill up on cookies.”

This is me, in my bedroom, thinking about doing my laundry. The prognosis looks good: I’m actually looking at the laundry, and so I think if I manage to make myself sort it—actually even if I just dump it out on the floor—that might be the magic step that pushes it and me magically towards the washing machine. But I’m not quite there yet, I’m still resisting, because

thinking about laundry and creating a story—painting with words, a portrait—of a woman standing at a kitchen sink thinking about doing her laundry

–can you not see her? She has bare feet, because she’s out of socks, but that’s okay, because she still has clean stockings, she’ll just wear those today instead, so does she really need to do that laundry?

is more interesting than, you know, engaging in the actual act.

Enough. I’m going to do it.

Jane: “You go right ahead.”

This is me, at the kitchen table, drinking hot coffee, writing about thinking about doing my laundry. 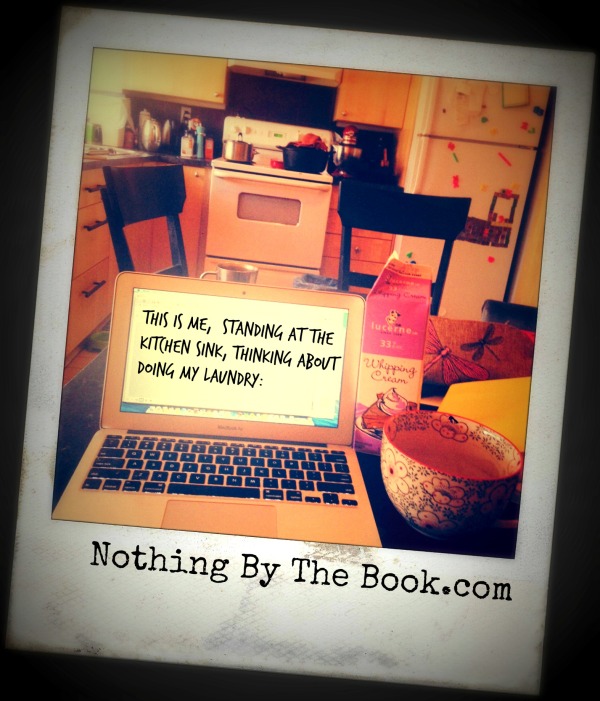