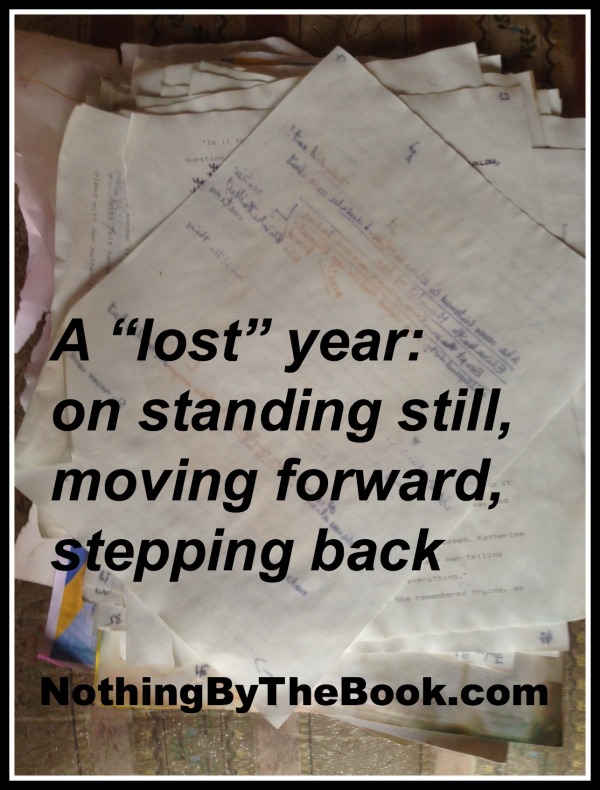 Come. Come in. I have something I want to show you. Here, over here: this box. That one. And that pile over there. Remember, I told you about them? My papers, my manuscripts, my letters. The record of my early creative life.

There is no reason to save them, to hold on to them. They make me cringe, you know, when I look at them? They are so very, so very terribly, wonderfully bad. 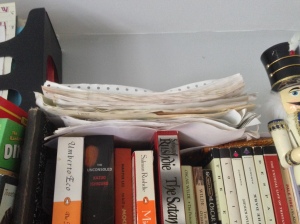 Flora: What are you doing, Mom?

Jane: I’m trying to write something that’s simultaneously truthful and not asshat pretentious, and failing miserably.

Flora: Oh. Are you going to be much longer? Because I need you to take me to the craft store to buy me more clay.

Jane: Yeah, ok. In a bit. Hold on. I’m trying to explain why I’ve spent an entire year tripping over boxes of molding, unreadable papers.

They actually do stink. I’m pretty sure they’re actively molding. Maybe, if I procrastinate long enough, the mold will finish what the flood started. Maybe, I’m waiting for a force of nature to take agency away from me again…

Cinder: Mom? What are you doing?

Flora: Ssssh. She’s writing about how she can’t throw out those stinky papers.

Cinder: Isn’t it because she’s lazy? 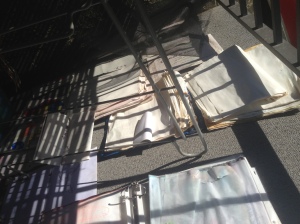 There’s also a part of me that’s really pleased that this early work is so fucking bad. You know? Wouldn’t it be terrible—it must be so terrible—to look at what you did 20, 30 years ago and say—that was my best work! Why can’t I write like that any more? What’s happened to me? Definitely not the issue here. Those boxes are not full of my best work.

But, but… they are this titillating record of potential. You know? That poem, the one you tried so hard not to read when separating the wet pages, but you did, and you laughed out loud at its pathos? It’s awful-bad, I know. But there’s that one phrase… you know? That one phrase… I like it still, and looking at it, I see the places it’s gone in the intervening 25 years, and I like that. And while I’m embarrassed by the overall badness of the piece… those four words in a row… they please me.

And I’m reluctant to let them go.

Ender: Moooooooooom! What are you doing? I need you!

Jane: I’m trying to explain why I’ve been stuck, unmoving, unproductive… why I’ve felt tethered, trapped by the past, unable to move into the future, paralyzed by what was, torn between denying it and embracing, obsessed with the idea and yet working really hard at not thinking about it, not dealing with it…

Ender: I’m hungry. And I need you to get my bike out of the shed. And I can’t find my shoes. And also, I think I pooped my pants.

Jane: Right. I should do something about all of those things. Just give me a few more minutes here…

Do I need to let them go? An impossible question. What would I have done, had the flood not rampaged through them? The most likely answer: nothing. They would have stayed in their boxes. Existing. Unexamined. For years, decades, a lifetime.

I don’t like being forced to examine them. Examine myself: who I was, what I thought, how I dreamed.

Flora: Mom? Are you still angsting?

Cinder: Seriously? Do you want me to just go chuck them for you?

I had this not-so-secret plan, after I failed to be able to deal with the remnants of the papers right after the flood (I burned my destroyed letters; I couldn’t touch the manuscripts), that I would mark the anniversary of the loss with a big, cleansing bonfire. I’d invite my writer friends, and we’d be all very solemn and supportive, and then get rip-roaring drunk, and we’d burn my past, and a new stage of uber-creativity would rise from the ashes… 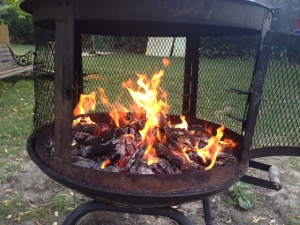 So here I am, a year later. And there they are, my boxes, my papers, my past. Still unexamined, unsalvaged. Neither discarded nor saved.

Me? I look back at this past year as, in many ways, a lost year. A year in which I both failed to move forward and didn’t have the ability to look back: a year in which I stood still. But maybe I had to. Maybe, for possibly the first time in my life, I just had to stand in place for a while…

Cinder: OMG, Mom, are you still writing about those stinky papers?

Flora: Hey! She’s a writer! That’s what she does! But could you please hurry up? We have things to do! Places to go!

So. I’m not quite sure I’m done standing still. Maybe that’s what it is. Maybe I need to stand still a little longer. Digest-marinate-process all that I was a little longer.

But not for too much longer. Not forever. Because I have things to do. Places to go. Stories to write. A life to live.

My terrible-no-good poems and novels—and hey, here’s a short story I wrote in my 20s, and this one actually doesn’t totally suck… it’s not good, but it’s not god-awful either—my papers, I think, will stay in their purgatory for a little longer. Just a little longer. And when I’m ready to get moving again, I will let them go.

No bonfire this year.

But, there will be a hell of a party… 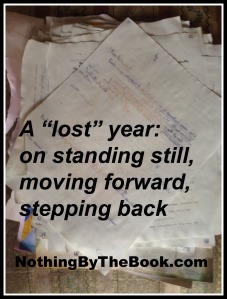 P.S. An invitation: If you’re in Calgary, you should spend some part of your weekend celebrating the one-year anniversary of the flood and Neighbour Day in one of the communities you helped to save. If you worked in Sunnyhill, our big celebration is on Saturday, June 21, from 5 p.m. on; the greater Sunnyside celebration is on Sunday, June 22, 4 p.m. to 7 p.m. at the site of the Crisis Café.

If you have no idea what I’m blathering on about, YYC Flood 101:

Running on empty: why “so are things back to normal?” is not the right question October 29, 2013

It’s the time of year when river walk means walk in the river…
Princess, 4 (and the skyline).
Princess, 3 (in the sunlight).
Princess, 2 (in the shadows).