For–no, not Flora, come on, how obvious would that be?–Monika. Who once had one of those jobs.

We’re in Havana’s Natural History Museum, which isn’t nearly as depressing as Havana’s National Aquarium—chiefly because all the animals are stuffed, so one might feel sorry that they’re dead but one does not feel sickened by the awful life they’re leading.

Cinder is bored out of his mind.

Me… I’m fascinated by all the wrong things.

Like so many things in Havana, the museum is a time-piece, an anachronism… and also, an embodiment of the tension and lunacy that result from the attempt to insert political education into everything. The mix of 19-century shackles carried into the 20th century—the good intentions handicapped by strapped resources—the desire to educate but only in the right way—the inclusion of Russian scientists nobody else has heard of in the gallery of the giants of science…

Cinder: “Are you talking about how few indigenous mammals there are in Cuba? It’s not weird at all—it’s an island, and…”

Unschooling for the win. I didn’t even notice that, but yes. The paucity of the local fauna is actually quite astounding. A result of the Spanish conquest, or predating it? Large mammals don’t thrive on islands, of course. Were there more mammals, more birds before the Spaniards and their guns arrived? Must find out…

Now that Cinder points it out, there are virtually no reptiles—except for the sexy sea turtles—in the museum either. And we keep on seeing geckos and little lizards everywhere. Is it because they are common as prairie dogs back home and only tourists give a fuck?

Also… as far as this museum is concerned, Cuba has no flora at all…

Flora: “Are you talking about me?”

But what I really think is weird is how massively overstaffed the museum is… and how none of the staff is actually doing anything.

The museum is spread over two floors, and the exhibits sort of flow into one another, but there are archways and open doorways, and at each of these divisions, there are two women—white shirts, beige skirts—sitting in plastic lawn chairs.

At the moment, in addition to us, there are three other families in the museum (it’s small enough and so designed that from almost any vantage point, at least on the second floor, I can see the entire space). The guides outnumber us—especially if you count the clump of four at the front, by the cash register and the mandatory bag check.

Cinder sits down in a chair by a table on which are three books about Cuba’s most important naturalist. (I didn’t write down his name, so you don’t get to find out who he was, precisely.)

Guide 5 comes up to him immediately.

Cinder: “What did she say?”

Jane: “This table is just for sitting at to read these books. So I guess… either pick up a book and pretend to read, or go sit on the stairs?”

Cinder: “This place is so lame!” 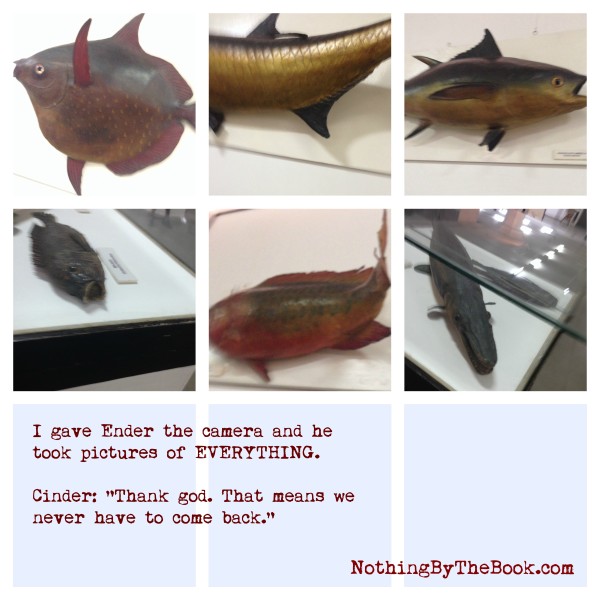 …but then he neither understands nor probably hears any of the prohibitions. He sticks his fingers into the grooves of a blue whale mandible.

Flora: “But why do they just put things on the floor and tables like that if they don’t want little kids to touch them?”

Cinder: “I guess so that all these people have jobs?”

He looks at the guides for the first time with vague interests.

Cinder: “They clearly don’t know how to do anything else. And if Ender wasn’t here touching stuff… they’d just sit in those chairs all day.”

Flora: “What are you saying?”

In Poland, during the post-World War II socialist experiment—Poles call it the 50-year Soviet occupation, by the way, and consider it more ruinous to the country than the six year war that preceded it, killed more than 20 per cent of Poland’s population, and left Warsaw with barely a building standing—the revenge of the occupied was pretty simple:

My cab driver today is a philosopher-entrepreneur-artist as well as tourist hustler. As we drive up La Rampa, thick with people on both sides—people walking, people sitting, people waiting—for what?—he says,

“There are always, always people here. Whenever I drive up this way, I wonder, ‘Why are all these people here? Doesn’t anybody in Cuba work?’”

Oh good. It’s not just me asking that question.

See, when you can’t buy bread (never mind eggs) on your way before work or after work, because it’s only ready at 1:30 p.m., and by 3:30 p.m. it will all be gone… you leave your job in the middle of the day for two hours to do your shopping. Or to spend two hours waiting in the queue at the post office to send a package, receive a package, get a money order. And everyone else you work with does the same thing. You all take turns at NOT working. You just do. You have to do that to feed your family today.

Everything else, work included, can wait.

That line –up there, I know, is for the famous Coppelia ice cream, but that one?

Jane: “Why are all those people waiting there?”

Driver: “The bank probably ran out of money.”

Communism collapsed because people who have to wait in massive queues for life’s essentials DO NOT WORK, do not produce.

I am, at heart, more socialist than capitalist, but more than either, I am a creator and if I have a credo, it’s tied up in the belief that a meaningful life is productive life—define productive as you will.

Those young women at the Natural History Museum, who spend six hours a day sitting on their asses in chairs saying “No running! No touching!” offend me.

They offend me because I know that their job—what they do every day for a salary so miniscule it might as well not be paid—rots them.

They are essentially being paid to do nothing. They go to work… and they create, produce, contribute NOTHING.

As we leave the museum, three women argue which one of them has to get out of her chair to return my bag to me. I don’t tip her.

Cinder: “Just to clarify, Mom, are you pissed off with us for playing tag in the museum?”

I’m pissed off at a political-economic system that dismantles each of its ideals as it implements them. And also, the Americans. Always, the Americans. Just, you know, because. (Sure, the Russians too, why not.)

Cinder: “Good. That was fun. And now we know all we need to know about Cuban wildlife.”

Cinder: “It consists mostly of stray cats and dogs, and the occasional free range chicken.”

With gratitude to all the people who make my work possible. Today’s post is brought to you by Janine Morigeau‘s almost-soundproof basement, Harold Cardona’s Snowball mike, and Sean Lindsay’s prowess with Adobe Audition. Thank you, my beautiful friends.

LANDED here for the first time? Let me catch you up:

And if you like what you read/hear/see, please consider expressing your delight by becoming a patron of this project via PayPal:

Jane: Because you’ve always wanted to be a patron of the arts, and you know that artists can’t pay for groceries with exposure.

Jane: Buy me a cup of coffee, a Cuba Libre, or a counterfeit Cuban cigar.

Jane: My avarice is happy to match your affluence. But I get $1 in royalties for each copy my other self sells of a traditionally published book. It is impossible to disappoint me.

If you would like to make a contribution, but have PayPal issues (I get it), please email me at nothingbythebook at gmail.com, and we’ll work something out.