I’m writing in a new place in my new place: the gas fire that’s the primary heating source for my 1913-built “garden flat” (old walk-out basement suite in less pretentious terms). The building has character, and the capricious heating that is the price of it. There’s a massive boiler in the basement proper that’s behind my apartment, which heats most of the building and, through a radiator, my bathroom, and through proximity, my kitchen. My living room and bedroom, however, are radiator-less and far away from the boiler—but equipped with large windows, one of which never closes fully. They rely on warmth from the fireplace, installed in 1996, when the building’s new (and current) owners, bless their hearts, decided that the basement denizens deserved to be warm in the long winter months as much as the upper story tenants. 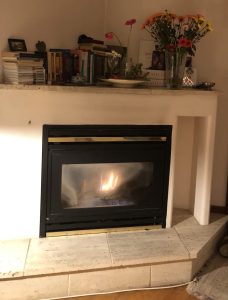 So here, I am, in the opening fall months that already taste like winter, warming my feet in front of the fireplace as it warms up the apartment from the cold night. The forecast calls for a beautiful, sunny day with near-summer temperatures. But the nights know winter is coming. So do my toes, and they reach out for the fire, which bursts into life with a loud crackle, burns until its heat reaches the sensor on the thermostat that controls it, then disappears… only to come alive with a pop a few minutes later.

I expect there might be a way to make it burn incessantly—cranking the temperature into the 30s, for example—but in some ways, this is better. Intermittent reinforcement always is…

Today will be a chore day and a work day, a long list of tasks to move through, few of which inspire passion or are driven by desire. But, desire-less, I will try to be like my fireplace flame: come alive. Do the task. Burn out—and sit still, drink a cup of coffee. Maybe read some poetry. Explode into a second, third burst of energy.

I can do that—I don’t want to do that—I will do that. Reward myself with heat from the bursts of the flame in the chilly evening—after the almost hot day—and meditate on the mesmerizing quality of fire.

What are you doing this Monday? 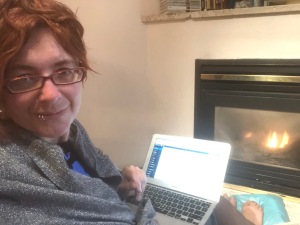 2 thoughts on “Pandemic Diary: Adulting without desire looks like this”

It’s the time of year when river walk means walk in the river…
Princess, 4 (and the skyline).
Princess, 3 (in the sunlight).
Princess, 2 (in the shadows).