It’s sort of Pride Week in Calgary. Pre-2020, we had the best of all worlds, really: in June, while San Francisco, New York, Toronto, Montréal, Vancouver et al. celebrated Pride, some of us travelled there and some of us had micro events here, and meanwhile, we planned for the Labour Day Weekend, when Calgary has been celebrating Pride since 2009—because our June weather sucks, what with the rain and floods and what not. By mid-August, our Pride events were really in full swing and so the parade, held on Labour Day Weekend Sunday, and its after-party were really the end, rather than the beginning of a week—month—summer—long queer orgy. 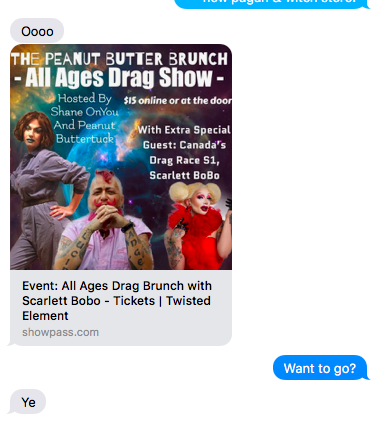 Of course, no parade this year. But, today, Flora and I are going to an All-Ages Drag Brunch at the Twisted Element, which has transformed itself from a nightclub in which nothing happens until after midnight to a pub with table services and a kitchen, with a couple of fellow queers—(parenthetically, I really love being the mother of teenagers—they are way more fun than toddlers). Because we’re doing that, we’re missing the Pride Park Takeover at Pearce Estates Park, hosted by Here and Queer Events –but, like, you should go. Calgary Pride is also, of course, offering an assortment of events all through the week, some on-line, some live, all queer as fuck.

So while it will be a shoestring Gay Christmas this year, Glittery St. Nick will still ride through town in his ass-less chaps and the lesbian angels will sing… on Zoom, occasionally live, six feet away from each other…

Better than nothing, right? But oh, I want to dance, I so want to dance—especially as I was supposed to dance at a wedding in Warsaw today (Congratulations, Łukasz and Magadelna!) but the only way that will happen will be if someone throws a somewhat illicit house party—about which none of us will tell anyone anything because, well, y’all are judgemental pricks and, in your own way, as rabid and dogmatic and uncompassionate as the anti-maskers… there. I’ve said.

Sorry-not-sorry—unloving thoughts on the eve of Calgary’s love is love celebrations. But. Seriously. Don’t understand why getting basic human rights for LGBTQ+ people has been such a slog and we’re still fighting for every single gain—or why the queer community is so fractured and rife with racism, transphobia, bi-erasure, femme erasure et al.? Look at how well we’re tolerating different risk assessments and responses to the pandemic.

The anti-maskers aren’t the only culprits. Think about it.

And then I will dream about a crowded dance floor while spinning in a circle, alone, in my living room.

Unless you’re hosting a dance party. In which case, text me.

One thought on “Pandemic Diary: YYC Pride in Year One of the Pandemic”