Last week, I started drafting a post celebrating and documenting Calgary’s Pride 2019 and telling you why it is we march—and why if you don’t get that it’s political, that all the joy and dancing and laughter and singing around Pride is so political, then you shouldn’t come to our glitter party—but I couldn’t make it funny or even particularly convincing. So I shelved it.

The week before that, I wrote three very long essays about why I hate the family therapist that’s part of Flora’s medical team. Short-hand: She doesn’t understand. Me, Flora, our family. I don’t like her. I don’t respect her. I don’t want to listen to her, and I can’t hear her even when she gives me something of value, because I really need to be able to be angry at someone, hate someone, blame someone, and she’s the ideal candidate for the task. But I couldn’t make it empathetic or compassionate. It just sounded mean, and I didn’t want to come across as mean. Just… pissed and misunderstood.

We live here, how lucky is that?

Then, some good things happened, but I didn’t even try to write about those, because I didn’t want to jinx them. I jinxed some of them anyway. Alas.

And since Tuesday I’ve been trying to compose a “Back to School” post. My first-ever, because this is Cinder’s first “Back to School” year—my boy’s in grade 12, y’all. And it’s Flora’s first-ever “to school” year—she did it, we did it, she made it to regular school on day 1 just as she decided way back before BAM! Surprise! Curveball!

Flora’s first day of school; yes, that is her unicorn costume

And, Ender’s first year at home alone. I mean, with me, but you know what I mean. I don’t count, because I’m an adult. His first year at home alone without his siblings. He missed Cinder desperately when Cinder went to school last fall—I found this odd, because it seemed to me Cinder spent most of his time in his room anyway, playing computer games and punching holes in walls—but apparently just having him in the house was… nice.

I’m trying not to overplan and overpanic. He’ll be fine. He’s got buddies in the hood, and a homeschooled buddy just two doors over.

Cinder planning his semester (who is this kid??)

He’ll be fine. Me? Here’s the funny thing that most people don’t get. When Cinder went to school, I did not suddenly magically have more free, non-kid time. Because there were still two kids at home (and one of them was about to need 24/7 care but let’s not go there again, not now, not yet). And now, with both Flora and Cinder in high school—I do not magically have more kid-free time. Because, there is still… Ender. And an Ender who no longer has two older siblings to hang out with during the day, to distract, to bug, to annoy, to fight with. 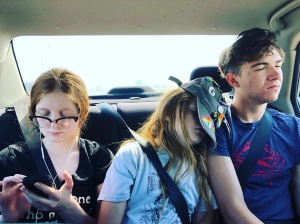 And then there were three…

We survive our first week solo relatively well. Tuesday and Friday are a half-day, and on Wednesday, we have lots of errands, and Thursday is a beautiful day, so we spend a lot of time outside, and then, the weekend, and a sleepover with his cousins and all his friends on the Common.

And today is Monday, our first week of five full days of no Flora and no Cinder at home. 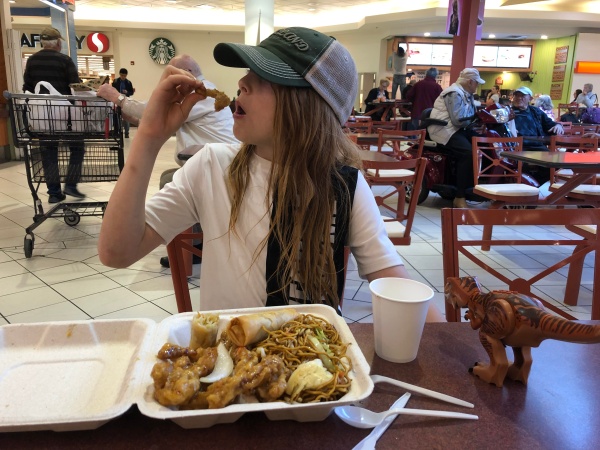 Ender’s “not back to school” lunch

Our coping strategies are very similar. I decide to reorganize the homeschooling supplies and purge the stuff that we are definitely never ever going to use again. Ender reorganizes his Lego shelf—to make room for the new Lego sets he’s planning to receive for his birthday, my eternal optimist.

We read a book together, then I read alone.

I do laundry, because it’s Monday and it’s raining, and that’s what you do on rainy Mondays when you have a dryer and a large drying rack.

He sorts his Lego, then starts uploading Minecraft mods.

I scour the house for chocolate. For fuck’s sake, surely, there’s an untapped stash of chocolate somewhere?

(There isn’t. I eat a handful of chocolate chips instead.) 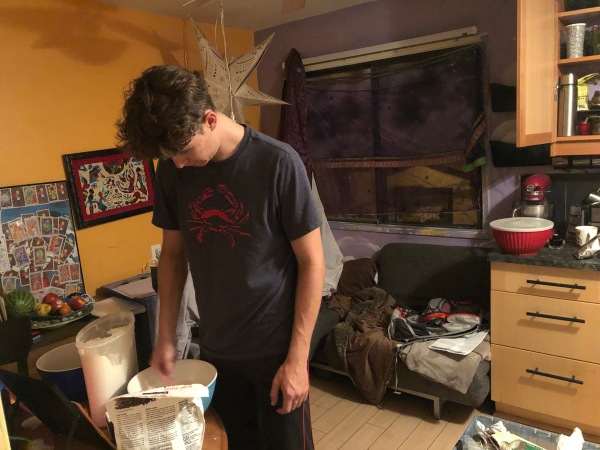 There aren’t very many chocolate chips left in the house, because Cinder was doing midnight baking…

He asks for three lunches.

I answer an email, then text, from a new homeschooler who wants some advice on learning plans and unschooling. I’m not sure if what I tell her will be helpful. Because in the end, my “proof of concept” is unique to me and my family.

I think a lot about my work. Write some new words. Delete a few. Write a bit more.

I ask him if he wants to go swimming. Or something?

I go back to my computer. Tickle the keys.

Invite the nervous new homeschooler over for coffee.

Write while I wait.

Me and my “baby,” at the Passport Office

2 thoughts on “Two in high school, one at home equals… I don’t know, I’m really bad at math”