I am smoking my first cigar in weeks—but drinking tea, not coffee (although I did have a cup of the chewiest, most hedonistic-erotic-arousing-fullfilling Turkish coffee a few days ago, OMG, my black drug, you make me…)—and I want to write you a story. 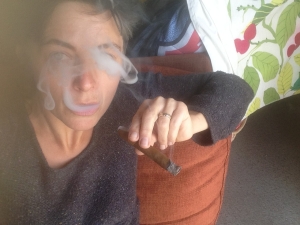 Flora: Mom, I had a nosebleed, and I tried to clean it up, but the bathroom looks like someone slaughtered a pig in it.

Jane: Um… can you clean it up more?

Flora: No, I have to go rescue a mouse.

The bathroom doesn’t really look like someone slaughtered a pig in it. But it could possibly be mistaken for a poorly cleaned up crime scene.

I give the blood streaks a half-hearted wipe.

We are having a meeting in the Common and chewing out the challenges of community living (it ain’t always paradise; actually, it’s rarely paradise, but it’s the closest to heaven we can come), and my neighbour uses her in-family compromises as a metaphor for what we need to do as a community.

My ears perk up, because that too has been part of my journey.

“When I get everything cleaned up just so, I’m happy—for about half an hour. And then my family tries to live in the house. And I nag them. And… they suffer.”

She says more… and you could argue with her, I suppose. You might. You like to keep your house very tidy too.

Me, I hear her perfectly. I remember the years of writing, over and over again:

The end result is a house that will cause Aunt Augusta (she’s a metaphor) pain and will make her judge me as an inadequate housekeeper and thus an inadequate human being.

The end result is a house that five people love to live in, that everyone considers their own. 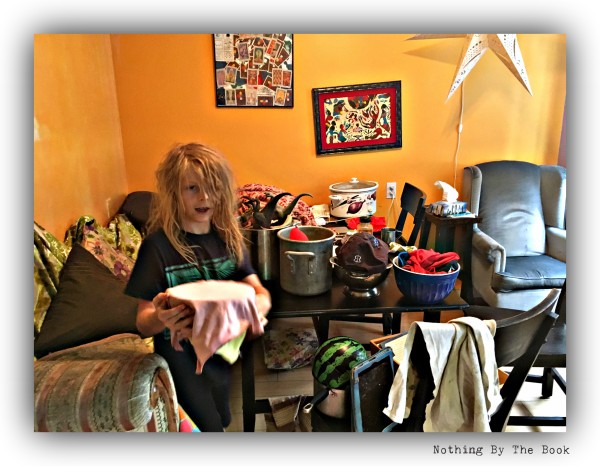 Aunt August always calls it her house, her kitchen.

The pronoun always makes me… flinch. I wonder how her partner, her children feel about that.

I prefer to live in… our house.

I keep my space in our house the way I want it. Everything else? It’s theirs as much as it is mine—some places, so much more theirs than mine.

I just had this thought as I’m doing all the food and house related drudgery.  The reason “women’s” work isn’t appreciated but Dads doing “women’s” work are celebrated is because on some level it is assumed women just know how to do all things domestic so it’s no effort for them whereas it’s hard for Dads because they have to learn something unnatural to them.

I think this is brilliant.

And then I decide I’m not a slob, but a radical revolutionary. 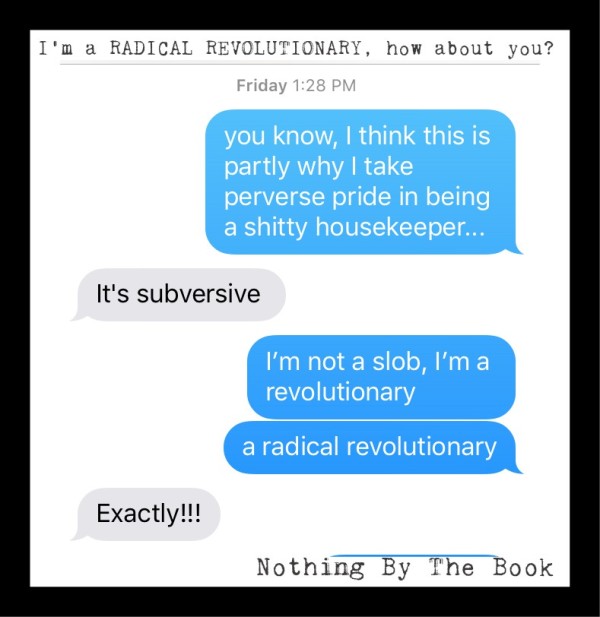 It is of course much more complicated than this, and I know I’m over-simplifying, but let me leave you with this:

If you weren’t scrubbing your kitchen floor, counters, bathroom, whatever, today… what else could you be doing?

And don’t throw that “these things must be done” stuff at me. Let’s assume a minimum standard here. I’m not suggesting you—or I, for that matter—live in an unhygienic pig sty. Let’s assume… it’s good enough, it’s clean enough. Child Services won’t freak.

Aunt Augusta, though, will judge.

An idea: until you can just shake her judgement off… stop inviting her over. 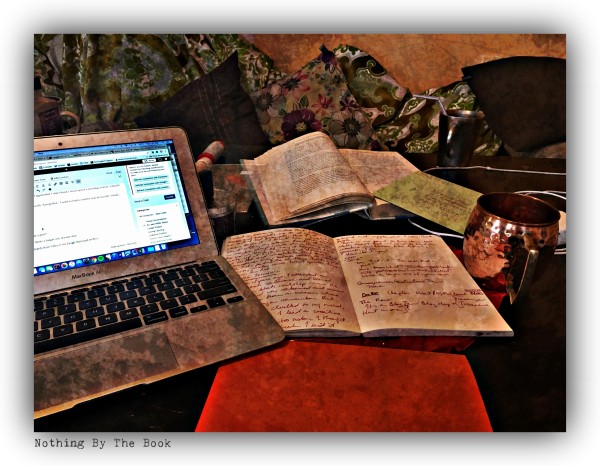 When Sean brings the bathroom to a good-enough state a few days after the nose bleed, all the blood spots are gone. Why I love him—he doesn’t even mention that he had to scrub them. He just does it.

There’s this really, really brilliant comic about gender conflict and housework in heterosexual partnerships that I’d like to send you to: The Gender Wars of Household Chores: A Feminist Comic by Emma.

It makes some really brilliant points, and one that gave me pause:

So I’d like to offer you this life hack, which I think is the reason I am able to homeschool, work from home, chase my passions, and live the life I want.

(I know I just gave Aunt Augusta an anxiety. Someone want to hand her a glass of water, please, perhaps doused with laudanum? Thank you.)

Cinder and Flora take out the recycling, and Ender does not want to put away the cutlery.

It takes less than five minutes.

There is a sub-moral in there somewhere too, that possibly contradicts some of my thesis above. I don’t care. Sometimes, you just go and clear the table. But other times… Negotiating relationships and living as a family, community can be complicated, and sometimes, arguing—sorry, discussing—something for an hour instead of just doing the five or ten minutes task-at-hand is a necessary part of the process. 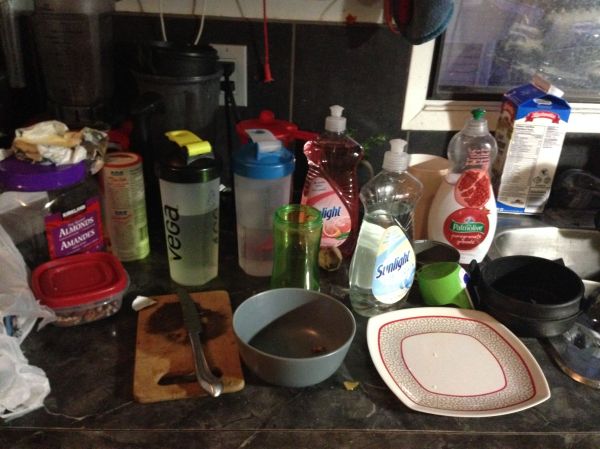 I’ve smoked my cigar. Written you a story.

I might now go tackle the dishes in the kitchen. Although I’m pretty sure it’s Flora’s turn to wash and Cinder’s turn to put away. I might just argue about that with them for a while instead, and then, while they do the dishes, write another story.

9 thoughts on “I’m not a slob: I’m a radical revolutionary, or “Housework is unnatural””