Today’s postcard is brought to you indirectly by an American multinational conglomerate corporation incorporated in New York, and headquartered in Boston, Massachusetts, which doesn’t exactly know what it is it is funding when it signs my cheques. And… written in February 2016, it seems horribly, horribly relevant today.

There is no class system or racism in Cuba. Read all about it: Castro fixed it all in 1959—a brotherhood and sisterhood of man and all that.

But my landlord is of Spanish descent, and the woman who cleans his house—my house—is Afro-Cuban.

Cinder: “What the hell are you doing, Mom?”

Jorge’s much-too-beautiful housekeeper spends four and a half hours every Saturday cleaning this three-bedroom apartment top to bottom. She’s breathing hard and sweating by the time she’s done. It’s the kind of clean that I promise myself I will give my house every spring… and haven’t done for the past three years. You know? Windows thrown open and polished, every piece of furniture wiped down, every corner dusted…

She does it every week. And on Thursdays, she comes and wipes down the furniture on the verandah, and washes that floors, and the outside stairs.

There are some things I won’t let her do.

I make sure the kids clean up their rooms and put everything away, so that all she has to do is change the sheets and mop the floor.

I clean the kitchen counters—so that all she has to do is mop the floor.

I take out the garbage. Because—well, you know, if it was just kitchen garbage? Maybe I’d leave it. But remember—I can’t put toilet paper in the toilet here. And nobody ought to have to take out my poopy bathroom garbage while my legs and arms work.

What would you call that, Fidel? Bourgeoisie guilt?

A disproportionate number of the female hustlers—of sex and other things—seem to be Afro-Cuban as well, and almost all of the heterosexual male prostitutes—they wouldn’t call themselves that, but boys, that be the word—are black.

When I stumble across the gay section of Playas del’Este, I see that the majority of gay male prostitutes are Latino.

Which in Cuba means white.

All of their customers, of course, are aging white men. Do they think they’re fucking white boys or does Latino for them mean not-white? 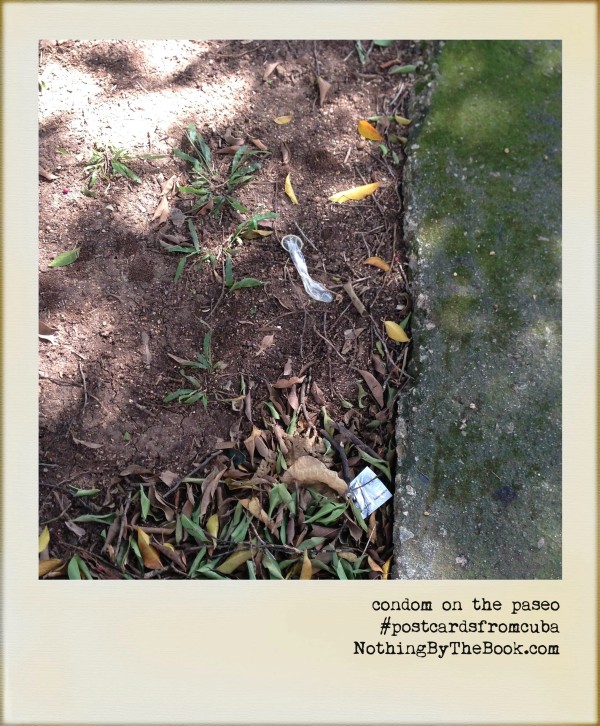 “[T]here is an unstated threat, blacks in Cuba know that whenever you raise race in Cuba, you go to jail.”

In all the Cuba guide books, phrase books, jintera is translated as a prostitute and jintero as a hustler.

Does this bother you? It really bothers me.

Also… if I meet one more tourist who tells me how wonderful it is that the Cubans are colour-blind—that race does not exist to them—I will scream, “Are you fucking blind?” at the top of my lungs.

“The term that was used by the police force to refer to citizens who weren’t white was ciudadano con caracteristicas — citizen with characteristics.”

(This statement is from one of the most insightful pieces on Cuba’s non-existent (ha!) racism in an article on the Al Jazeera website.)

Felicite is done and the house sparkles. I think it takes us about 10 minutes to mess it back up again.

But I know it’s clean under the mess.

Felicite: “It is my pleasure.”

But it’s not. It’s her job. A hard, thankless job.

When I tip her, she gets offended. But is also grateful.

In Canada, my Marie works nights as a janitor, cleaning banks, clinics and what not. When I go to visit her, I help her out so that we have more time to play.

It’s exhausting work. Also, boring. And, kind of thankless, because you know, the next day, you have to do it all over again.

And also… taking out other people’s garbage? Tells you waaay too much about them. And sometimes, makes you hate them.

Jane: “These people are disgusting pigs.”

Marie: “Yup. I think it’s because they hate their jobs.”

Hate their jobs, hate their lives.

And yet, feel mild contempt for the people who clean up after them, at Marie and me. Don’t hide it. I find it fascinating… educational and demeaning (and therefore, so educational).

They’re so much better than we are, don’t you know—because we’re taking out their garbage. 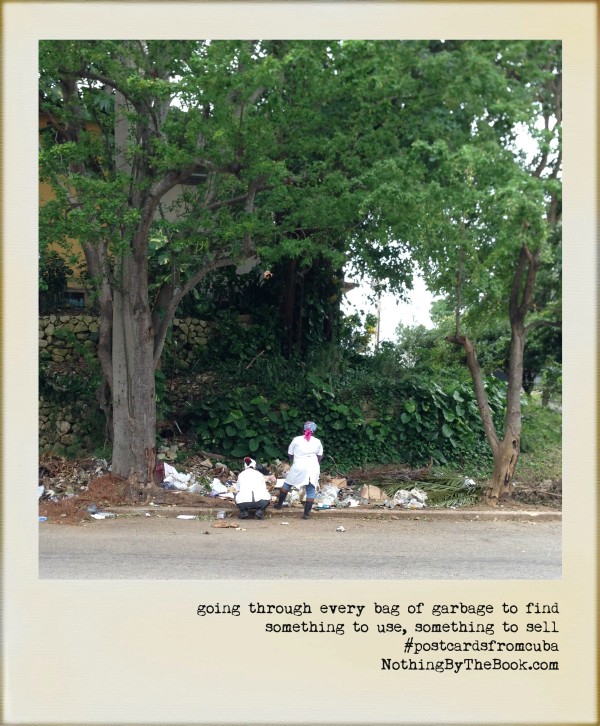 There is no class system in Canada. Just look at the surveys. We’re all middle-class—lower-middle, aspiring-middle, upper-middle. Rich, poor, in-between, doesn’t matter: something like 99% of the population self-identifies as middle-class.*

Because there is no class system in Canada.

Except that there is.

*I exaggerate, a little.

**Consider the source, always. But. Still.

The audio track for fragment of a love letter of a letter is now up. Wanna listen to it while you read the donation request?

If you’re new to the Postcards from Cuba project, catch up here: POSTCARDS FROM CUBA.

If you’re a returning guest…

A $5 donation makes a difference and helps pay my rent, feed ma’ kids, and keep on writing, and reduces my dependence on American multinational conglomerate corporations:

& no, you don’t have to have a PayPal account to use the button. Thank you!