Jane: What? Yes, of course.

Flora: And he really wrote The Raven?

Flora: And his real name really was Edgar Allan Poe?

Jane: Yes. Well, he was born Edgar Poe, but then he was sort-of-adopted by a family called Allan, and so he became Edgar Allan Poe…

Flora: That’s just brilliant. He’s so lucky. Because suppose he had been named Edgar Steve Poe? Or Edgar Smith Poe? He’d never have written The Raven then. No way.

With apologies to Steve Smiths… everywhere…

Flora: Was Charles Dickens a real person? A real writer?

Jane: Yes. He wrote… David Copperfield, which is so good. And of course, A Christmas Carol. And The Bleak House, and Nicholas Nickleby, and…

Jane: Yes. Sherlock Holmes was not a real person—he was a character created by Sir Arthur Conan Doyle.

Flora: It’s important to get these things straight.

Gods, I love her.

Flora: So Agatha Christie was a real person.

Flora: But The Doctor is not a real person.

Flora: But Matt Smith is a real person. And so is David Tennant.

Flora: Why is all of this so confusing?

Yes, she’s watching The Wasp and The Unicorn, and The Day of the Doctor. Simultaneously. Reading Sherlock Holmes (graphic novel version, adapted by Ian Edginton, and illustrated by I.N.J. Culbard—brilliant). I’m not quite sure from where Charles Dickens makes an appearance. I ask. “Horrible Histories.” Of course. 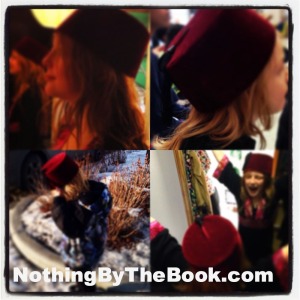 PS  “Well, this is all very nice interesting, but I’m here looking for that interview tips for kids video that’s part of the Sunnyside YYC Flood Scrap Book Project.”

“Are you? Thrilled. That’s this here: Filing, flooding, interviewing—or, ‘Confluence.’ Our kids and the film crew will be at the Hillhurst-Sunnyhill Farmers’ Market today interviewing. If you’re a YYC reader: come tell your story.”

13 thoughts on “Would Edgar Allan Poe by any other name smell so sweet? (And wear a fez?)”