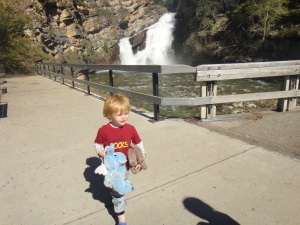 Jane: I know. I know. But sitting in your own poop is not just gross, I’m pretty sure it’s illegal for me to just leave you sitting in it. So–off we go.

Jane: I! KNOW! See, and if you tell me when you have to poop before you do it, I won’t have to…

That’s not the punchline. What, are you nuts? That’s just the set up.

Flora: Do you think Ender will get out of this potty regression before Mom goes totally insane?

Ha, that’s not the punchline either. Read on:

Jane: I’m right here. RIGHT! HERE! If you’re going to insult me, can you at least wait until I leave the room?

Flora: A, we weren’t insulting you, and b, there’s no point to saying things like that if you don’t hear them, right?

Jane: What have I done to deserve such off-spring? What? WHAT??!

Cinder: Well, I’m not sure, but judging by what’s just happened with Ender, I think you traumatized us during potty-training.

Pretty good, eh? But not the punchline. Not yet. Almost there:

Jane: You little… Never mind. Whatever. I have a poopy bum to wash. And then I have to get back to writing.

Flora: She’s going to blog about this, isn’t she?

Cinder: Yes. And she’s going to make us look like the crazy ones.

Well… tempting. But sometimes, a straight report of exactly how it happened is so much more amusing… and effective.

Good thing we love them, right?

I was keeping a “best posts I didn’t read this week” list for you but… um… it’s Friday and I still haven’t read them. Flood. I’m using that as an excuse for the next six weeks. “Why didn’t you do X?” “Um… flood?” I figure by September, the excuse will get old, but in the meantime… FLOOD!

P.S. Just so you know–we don’t like to be called victims or even survivors. We prefer floodies. And, when we’re all dollied up in designer rubber boots, haz-mat suits and wearing those weird little beanie hats and thick rimmed glasses: floodsters.

Have a… dry… weekend.